I am a traveler and story-teller who has just set out to wander the world. There’s nothing I like more than exploring new places, cycling, hiking, paddling and camping.

I started this blog (as http://transtri.wordpress.com) in November 2011. At that time, I was just getting back into fitness after a long period of depression. I spent about a year as a triathlete from July 2011 – April 2012 before switching to adventure racing and trail running (May 2012 – December 2013). I also started participating in Audax cycling events from January 2012 – January 2013.

However, after I completed 11 day / 250km Great North Walk in July 2013, I realised that racing was little more than training as preparation for real adventures in the outdoors. I started to do a lot more micro adventures and hikes.

Then, in February 2013, I had a serious health scare when I had a suspected mini stroke (TIA). This led to some serious soul searching. As a result, I sold my house, got rid of almost all my “stuff”, bought a set of panniers for my bicycle and negotiated a flexible work arrangement that will allow me to be free to travel the world.

I officially became an itinerant person on 14 April 2014 when my house was sold. I spent a few weeks camping and couch surfing before saying goodbye to my office and setting off on my bicycle on 22 May to see the world. For the first five weeks I am camping on Minjerribah (North Stradbroke Island) just off the coast of my home town. I still have to work full-time from camp but at least I am in the outdoors and one step closer to my departure for Adelaide on 8 July.

I don’t know where the road will lead or what this next chapter in my life will look like. But I invite you to come join me on my adventures through my blog. Feel free to comment because I love to hear from people. I try to respond to all comments. 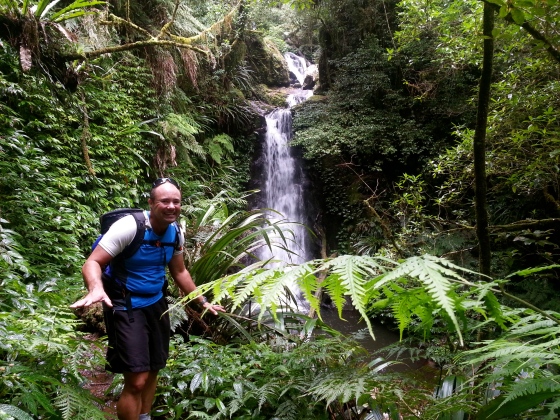 I acknowledge the Traditional Owners of the lands through which I travel during my adventures, and pay my respects to Elders past and present.

I have a new blog that follows on from this one. It's called Looking for 42 (Traveling the world by bicycle, foot and packraft while looking for the meaning of life)

I like to support small businesses who provide top quality products and services in our global market. The businesses I support have all provided me with exceptional products or services over and above the standards I would expect of any company.
----
Alpacka Raft LLC - packrafts
----
Ayup - lights
----
Bike Bag Dude - bikepacking kit
-----
Body Leadership Australia - physiotherapy
----
Coast Maps and Charts - map retailer
----
Hema Maps - map and mapping app producer