Posted by AndrewGills on October 12, 2013 in Travel, Walking

Albert St Uniting Church, a photo by andrewgillsag on Flickr.

They’ve stood the test of time and I’ve walked past them thousands of times. But yesterday I finally got to go inside as part of the Brisbane Open House 2013 event. My friend L is visiting from Tasmania so we played tourists in my home town.

We started with a visit to the Albert St Uniting Church. It always makes me think of winter-time and the northern hemisphere winter with it’s snow-like white trimmings a stark contrast against the bright red bricks. Inside, the church is stunning with it’s old-school wooden pews and brightly stained windows letting in multi-coloured light and telling stories of days gone by. I just love how the surrounding buildings compliment this Brisbane landmark.

I saw that the Masonic Lodge was open to the public. This is a rare event and I wanted to make the most of it. You can’t miss the Masonic Lodge if you walk up or down Ann Street because it’s so big and mysterious. Inside it was amazing! On the third floor is a huge main lodge room with fabulous ceiling work. The next floor down contained the supper rooms where Masonic regalia was laid out on display and tables were elegantly set. The first floor is home to the lodge rooms, two of which were open to the public. And finally, on the ground floor was a grand entrance hall with photos of the Grand Masters and their regalia on display.

After the Masonic Lodge we walked back down to City Hall to take our pre-booked (but free) clock tower tour. When my family first moved to Brisbane in the 1980s, City Hall was still one of the tallest buildings in town. Today, Brisbane has some sky scrapers but none are as grand as City Hall’s sandstone columns. 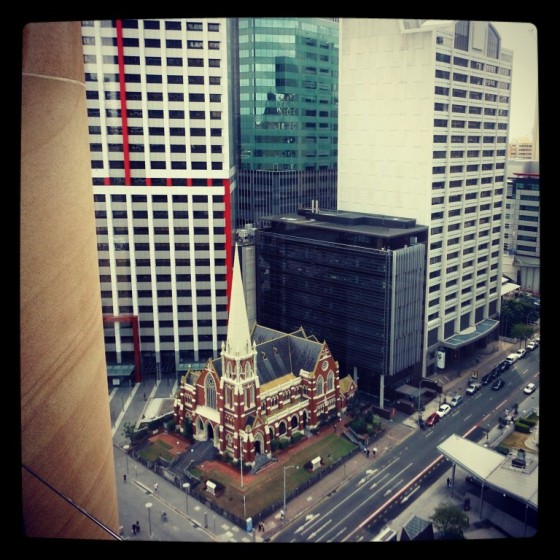 View from the clock tower

If you are ever in Brisbane, I highly recommend the free 15 minute City Hall clock tower tour. It gives a whole new perspective to your street-level experience of the city.

Naturally, I had to ride one of the lions in King George Square. I remember riding them with my sisters when I was a child and it’s a testament to the philosophy of Brisbane City Council that they haven’t put up “no sitting on the lions” signs to stop people taking full enjoyment of these old statues. The lions were installed as a tribute to King George after his death in 1936 and are a constant reminder that Australia is a constitutional monarchy under the Kings and Queens of England. The lions’ backs have probably carried the weight of thousands of people over their “lives”, maybe even millions.

The entry to my old school

We caught a bus down the road to The Valley because I wanted to show L my old school. Established by the Sisters of Mercy in 1861, All Hallows’ School is one of Brisbane’s oldest schools. To put this into perspective, Brisbane was first established as a penal settlement in 1825,  the first free settlers were allowed to live here in 1842 and the city proclaimed the capital of the new State of Queensland in 1859. As a student at the school from 1992-1996, I walked through these gates and up the steep driveway countless times. 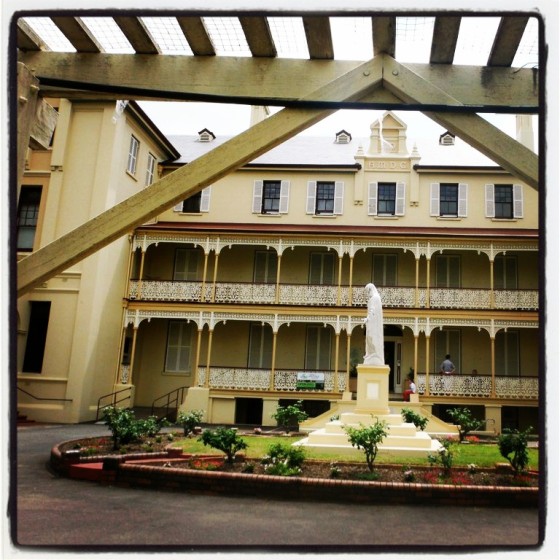 The All Hallows’ School convent

Nuns still lived in the All Hallows’ School convent when I was a student. Mornings were often punctuated by the scent of burnt toast or the sound of smoke alarms going off in the convent kitchen. The interior of the convent was strictly off-limits and the nuns’ lives a mystery. Only five nuns were still teaching when I started high school and, by the time I graduated, this was reduced to three plus the school principal. Yesterday, the front two parlour rooms of the convent were open and I felt almost naughty going in there to look despite all the nuns having moved out over the past decade. We also visited the chapel, which is one of the most beautiful Catholic chapels I have ever been in.

Our tour of Brisbane’s Open Houses seemed to be focused on the various denominations’ churches as we walked down the road to the Holy Trinity Anglican Church. This squat building almost lounges under the trees, looking relaxed and homely. But inside its dark wood and high foreboding pulpit are a stark contrast to my post-Vatican II Catholic church experiences.

We visited an old bread factory that is now home to Hassell Projects, an architecture and interior design company. The old factory walls still stand and Hassell’s open-plan and airy design made me comment that I’d love to work in the space. 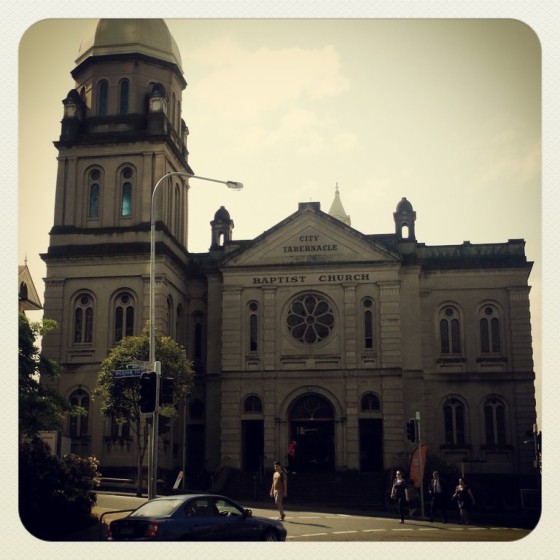 We caught a train back to the city to visit our final Open House: the City Baptist Tabernacle. Again, I have often walked past this imposing building and wondered what was inside. But the imposing exterior has always deterred me from entering. Inside, the tabernacle tells the visual story of the history of the Baptist religion with it’s semi-circular seating, communion table at the same level as the pews in front of the pulpit and the baptism pool. The organist was playing music on the pipe organ and we were able to stand right next to him to see him manipulate the four keyboards and countless settings.

It was fantastic to see my home city from another perspective. What made it an even more wonderful day out is that my friend L is the only person with whom I can talk about religion. She’s a Latter Day Saint who spent time in a Hutterite community while I am a Catholic who explored the Metropolitan Community Church, Buddhism, Taoism and Wicca throughout twenties. It was amazing to not just look at these historical places but also to be able to discuss them from a comparative perspective, both from a spiritual and historical perspective.

I acknowledge the Traditional Owners of the lands through which I travel during my adventures, and pay my respects to Elders past and present.

I have a new blog that follows on from this one. It's called Looking for 42 (Traveling the world by bicycle, foot and packraft while looking for the meaning of life)

I like to support small businesses who provide top quality products and services in our global market. The businesses I support have all provided me with exceptional products or services over and above the standards I would expect of any company.
----
Alpacka Raft LLC - packrafts
----
Ayup - lights
----
Bike Bag Dude - bikepacking kit
-----
Body Leadership Australia - physiotherapy
----
Coast Maps and Charts - map retailer
----
Hema Maps - map and mapping app producer